Douglas arrived the day before in his private rail car donated by the Illinois Central Railroad. Also, with that train was a car carrying “The Little Giant,” a cannon which was fired to announce the arrival of Douglas wherever he went. 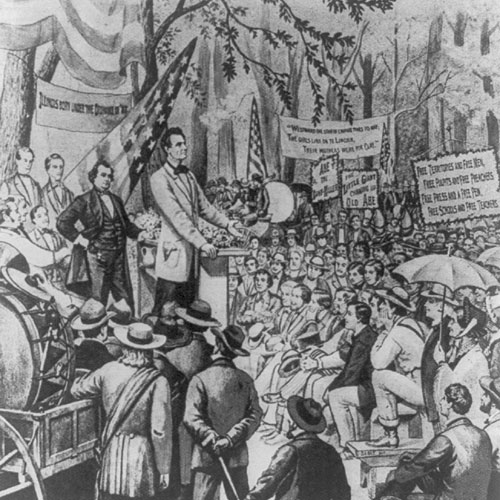 A torchlight parade escorted Lincoln from the train station the night before the debate.

Both Lincoln and Douglas spent the night before their debate at the Brewster House, Freeport’s premier hotel.

The Freeport Question, as history has come to call it, was posed for Douglas by Lincoln. “Can the people of a United States territory, in any lawful way, against the wish of any citizen of the United States, exclude slavery from its limits prior to the formation of a state constitution?”

Douglas responded, “…the people have the lawful means to introduce [slavery] or exclude it as they please, for the reason that slavery cannot exist a day or an hour anywhere, unless it is supported by local police regulations.”

The Freeport Doctrine is the name historians have given the response that Douglas made to the Freeport Question.

Popular sovereignty is what Douglas called his position and he had argued for it for several years before he debated Lincoln.

By repeating his popular sovereignty argument in Freeport, he alienated members of his party in slave-holding states and insured that he would face a divided party when he ran for President in 1860.

Public Works of Art in Freeport